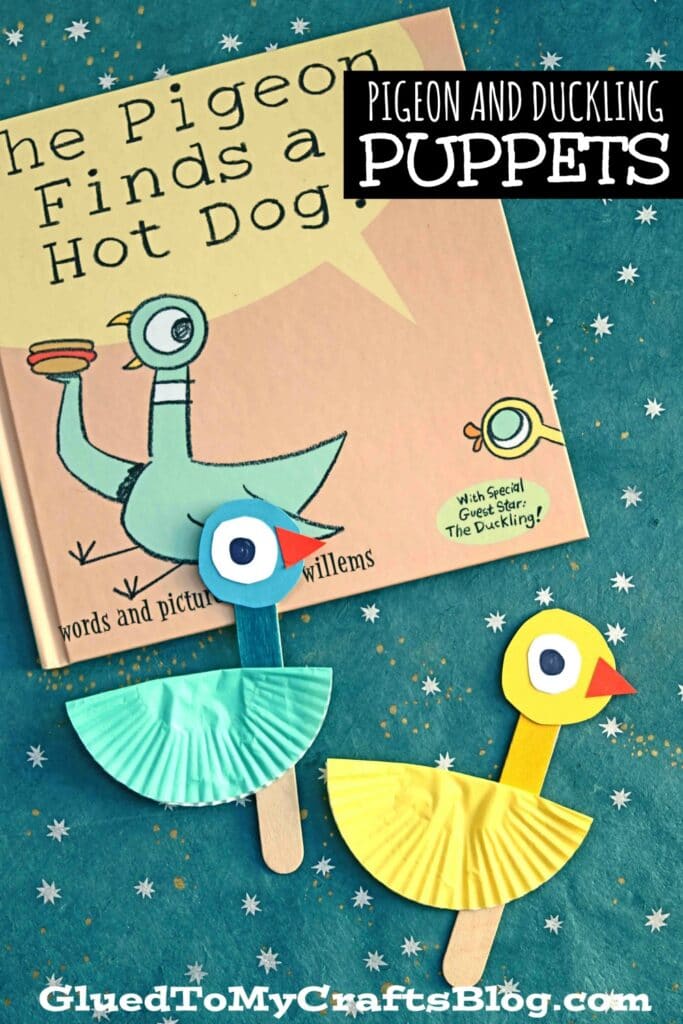 This Cupcake Liner Pigeon & Duckling Kid Craft is not only super fun, simple and inexpensive BUT it also goes along perfectly with the Pigeon Presents series {our personal fav being – The Duckling Gets A Cookie!?}

Award-winning writer and illustrator Mo Willems has created one of the funniest, whiniest, most persistent characters ever-a demanding city pigeon! Before stepping out for a moment, the bus driver of the award-winning Don’t Let the Pigeon Drive the Bus! makes one simple request of readers: “Don’t let the pigeon drive the bus.” That wouldn’t seem to be a big problem-until Pigeon starts wheedling and pleading! Whether he’s begging for a puppy or trying to stay up late, this funny bird acts exactly the way children do when they’re trying to get their way, and both kids and adults will recognize his behavior. At the same time, Willems puts readers in control, giving them a taste of what it’s like to be the voice of reason. Readers will delight in telling the pigeon what to do-and perhaps recognize a bit of themselves in his over-the-top antics. What could be more fun? Includes Don’t Let the Pigeon Drive the Bus!, The Pigeon Finds a Hot Dog!, Don’t Let the Pigeon Stay Up Late!, and The Pigeon Wants a Puppy!

So what are you waiting for? Aren’t these puppets super fun?! Let’s grab our craft supplies, follow the step by step tutorial below and get to work. Don’t forget to raid your local library so you have some books to read in honor of you adorable creation!

Happy crafting my friends! Be sure to share pictures of your cupcake liner and popsicle stick puppets on our Facebook page so we can admire it from afar! #gluedtomycrafts 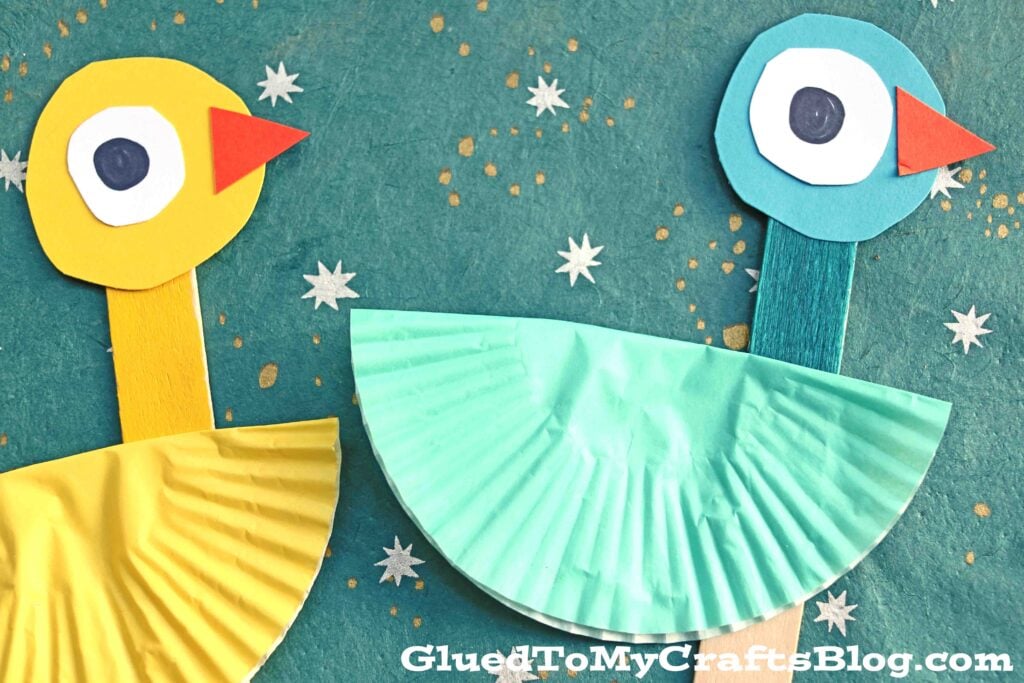 * First grab your jumbo popsicle sticks and paint supplies.
* Squirt the craft paint on the paper plate.
* Go ahead and paint HALF of the popsicle stick either yellow or a light teal color. Yellow is for Duckling, while the teal is for Pigeon.
* Once done painting, set it aside to allow it to dry completely.
* Now take your cupcake liner and flatten it out with your hands.
* Next have children fold it in half to create the body. Put some glue in the center of the cupcake liner so it doesn’t come apart.
* Once the cupcake liner is done, grab your cardstock and scissors.
* Using the cover a book as a guideline – cut out their heads.
* Use the black Sharpie marker to draw on an eye.
* To finish off the Cupcake Liner Pigeon and Duckling Puppet craft – glue your cupcake liner half and cardstock head piece in place, on the designated painted popsicle stick.
* Then add other embellishments you see fit and display proudly!

If you are looking for even MORE easy kid craft ideas that go along with children’s books, be sure to check out these fun posts on our website right now:

Have something to say? Want to show off your cupcake liner Pigeon and Duckling creations? Join the conversation on our Facebook page. We love hearing from YOU!