Brighten your child’s day by setting up this Popsicle Stick Cats In Sweaters kid craft idea on the kitchen table today! This super adorable craft is sure to bring an explosion of happiness while they create AND play with it afterwards! 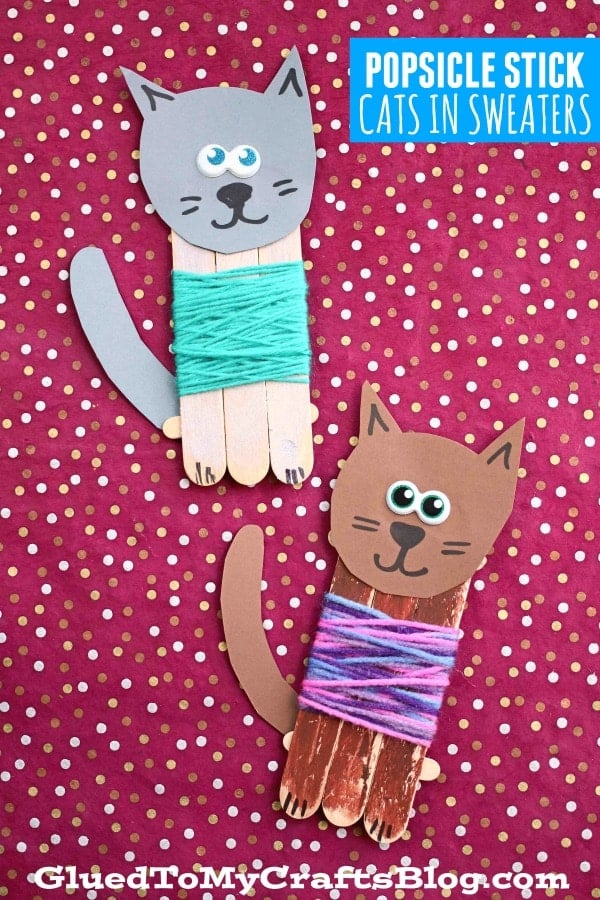 You should know, I’m not at all a cat person {even though my husband often says I was a cat in my former life.} We have never owned a cat and probably never will. I can’t say cats are my favorite…

So on that note, I’m actually not really sure where the inspiration for this particular cat themed kid craft tutorial came from. It was just one of those ideas where I was sitting on the couch and one thing led to another & somehow I was led to my craft table where these cats in sweaters were born. I honestly wish sometimes I could bottle up my creativity and sell it!

Anyways – I thought the finished product was super cute and it was worthy to be put on Glued To My Crafts today. I hope you see my vision for these Popsicle Stick Cats In Sweaters Puppets and are inspired to recreate them with your child as well! Wouldn’t they be great for some pretend puppet play this afternoon?

Although I hope you have the urge to make adorable feline friends everyday of the year, I could see this being a fun winter and/or Christmas craft so be sure to bookmark this particular post for the future. I went with more neutral colors for my cats but couldn’t you see green & red yarn being fun for the holidays?!

Now enough chit chat – what are you waiting for?! Let’s grab some EXTRA JUMBO popsicle sticks and some colorful yarn to create some cats in sweaters puppets today! I wanna see pictures so don’t forget to tag us on Facebook or use our special branded #gluedtomycrafts hashtag for us to see!

Happy crafting my friends and hopefully your crafty plans are PURR-FECT!

FYI – I recently found these EXTRA LARGE popsicle sticks at my local Walmart store but I also found them on Amazon. They are much larger at 7.9 inches so this gives you more room to work with and probably have better end results! Although I won’t discourage you from giving regular jumbo popsicle sticks a try! 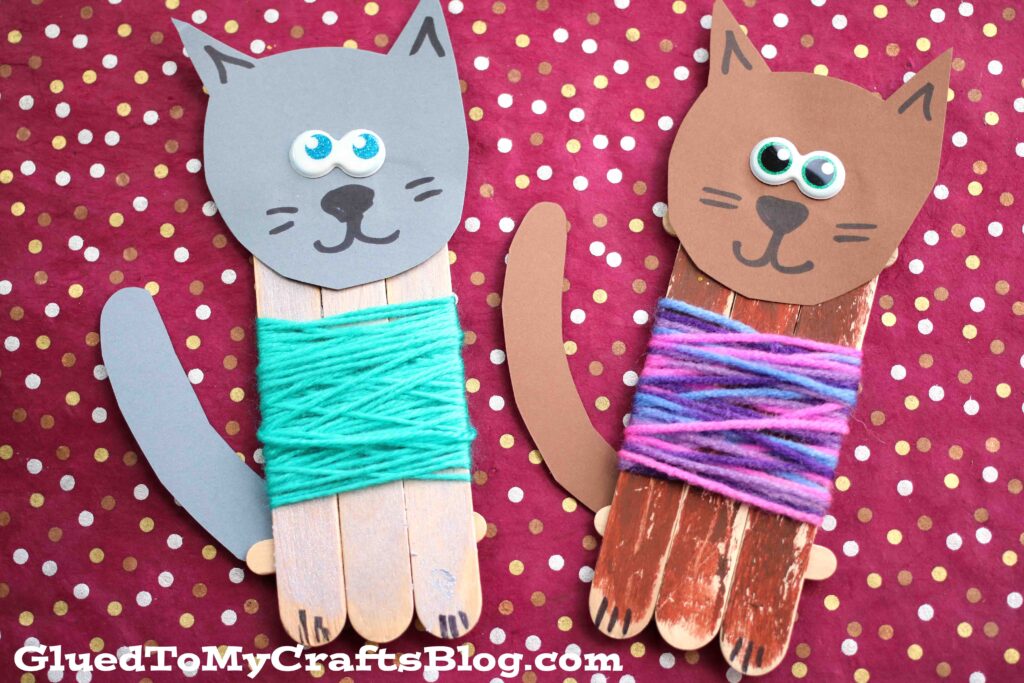 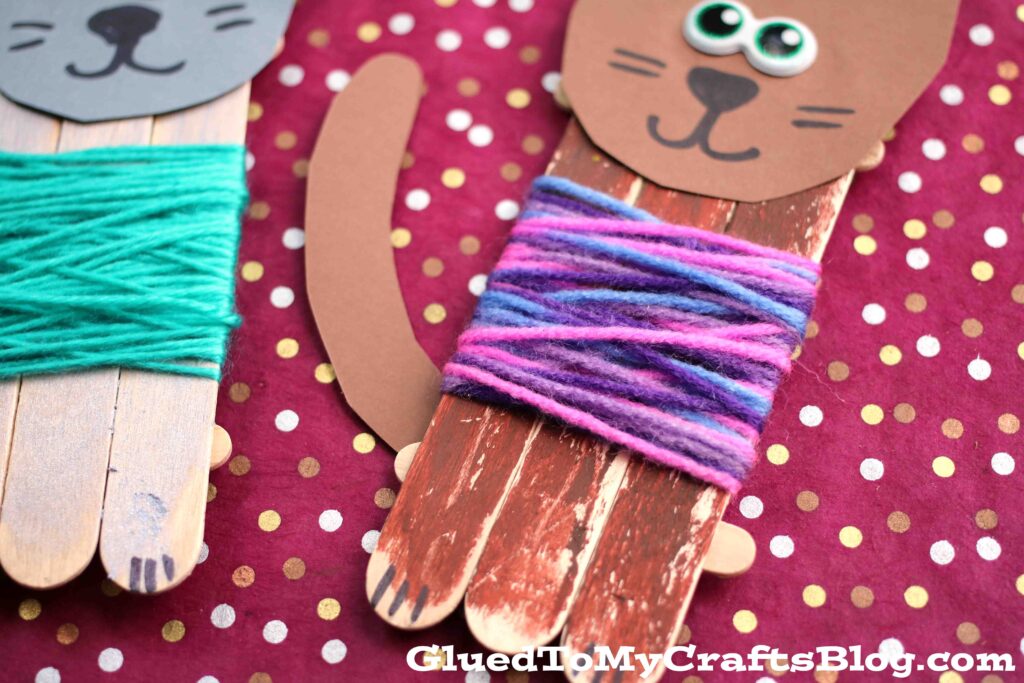 * First get the glue gun hot and ready.
* Assemble the base of your cat friend by gluing THREE jumbo popsicle sticks and TWO mini popsicle sticks together to look like a fence door {3 next to each other and the mini popsicle sticks across to secure in place.}
* Allow it to dry completely. Repeat for each feline friend you want to make.
* Now grab your craft yarn, the popsicle stick shape you just made and your craft scissors.
* Take one end of your yarn and hot glue it to the back of your popsicle stick cat body shape.
* Start wrapping the yarn SEVERAL times around the popsicle stick base, until you have the look you like.
* When ready, cut the yarn and use the hot glue gun again, to secure the loose end to the back of the popsicle stick base.
* Now grab your cardstock, marker and scissors.
* Cut out a large circle w/triangle ears, that will become the face of the cat. At this time you should also cut out a tail and whatever you think the craft needs.
* Take the black Sharpie marker and draw on the mouth & some embellishments on his feet for some added dimension.
* Now go ahead and glue ALL the paper pieces to the yarn wrapped popsicle stick shape from earlier.
* Don’t forget to hot glue some wiggle eyes on so he can see.
* Add any other embellishments you see fit.
* Then let it dry completely before displaying proudly!!!
* Don’t forget to snap a few pictures of your finished popsicle stick cats in sweaters creations to share with us! #gluedtomycrafts Above is ANOTHER version that I came up with, for a “cats in sweater” craft idea. It’s a smaller scale project {with only ONE popsicle stick} and I added a pipe cleaner for the tail, instead. Hopefully either/or of our craft ideas inspire you today!

And beyond today’s post – you should plan your craft activities with the help of Glued To My Crafts! We have soooo many awesome tutorials to inspire you!

Take for example our popular Chalk Art Campfire – Kid Craft, Paper Plate Sloth – Kid Craft and Paper Cupcake Liner Unicorn – Kid Craft posts! All of which are icing on the cake when you are looking for something unique but at the same time super easy to recreate!