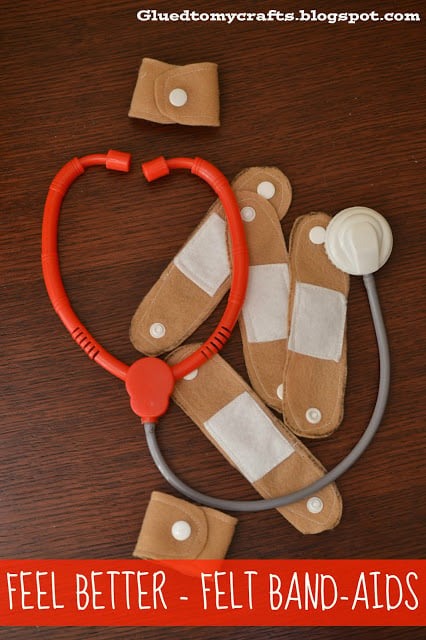 Hi friends! I’m so glad you landed on today’s DIY Felt Band-aids craft tutorial. These handmade pieces are great for a pretend doctor or vet setup in your child’s playroom. I could see this being recreated as a birthday, Christmas or just-because gift!

But let me back-track and share a little bit of a story behind this post. So this morning I posted a picture on Instagram, that I pulled out my sewing machine. The clouds parted & sunlight came through my living room.

Ok… maybe it wasn’t that dramatic but it’s not that often that you hear or see me doing that.

My sewing machine & I have this love/hate relationship. Because of that it’s usually kept in the closet for safe keeping. But it’s starting to grow on me. Plus I told myself that this deployment, I would learn to “use” it properly and create some fun pieces. I really want to prove to Joe that is the worth the investment :)

But what really inspired the sewing machine to come out of hiding, was a trip to one of my favorite stores – Target.

The second I went in the front door & saw that the Dollar Section was restocked with new items, I knew it was going to be a good day. That’s when I stumbled upon a Fake Doctor Set for kids. I squealed. Childhood memories played through my head. So no questions asked, it was thrown in the cart. {Along with a million other things.}

When we got home, I immediately gave it to Lil Man. Of course the thing he loved the most out of the kit was the fake tweezers. Go figure. I found him attempting to pull his stuffed animals eyes out. Oh the joys of a boy!

After showing him how to use the others pieces in the set properly, including the stethoscope, he was starting to get the hang of it. {We seriously need to watch more Dr. McStuffins}

While we played – a brilliant idea popped in my head. Lil Man needed some band-aids to go with his new kit. And I had the perfect supplies at home to make it happen.

And of course, I documented the whole thing so you can make your own as well. So BAM! That is how this Felt Bandaids tutorial came along. Ready to learn how?

Here is what you need to make your own felt bandaids:

I originally intended these band-aids to have Velcro on them. But of course, I could not find my stash of Velcro in my craft room. I seriously search high & low and evening putting this project on hold for a day to give more time to search. I did find these boutique snaps in my sewing stash, so I decided to use those instead. However, I do plan on making more band-aids with Velcro {after hitting up Hobby Lobby} because the snaps can be hard to open sometimes. Whatever you decide to use, this tutorial still works. 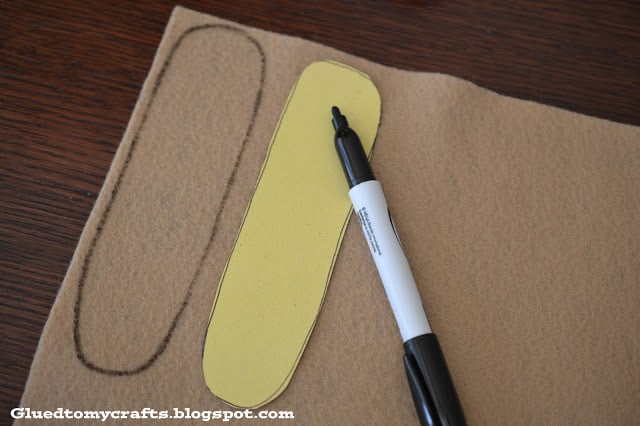 So first things first – I drew a band-aid shape on some cardstock. Basically it’s a thin rectangle with rounded edges.

I then cut out my band-aid template and traced the band-aid shapes on my tan felt with my sharpie. 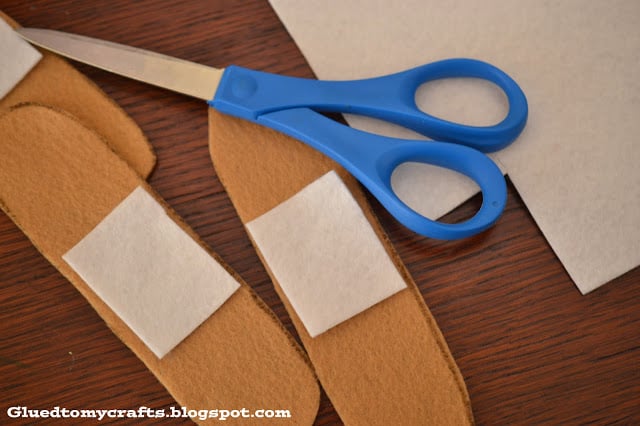 After tracing out all my shapes, I went ahead & cut the band-aids out.

Next I grabbed my white felt and cut rectangles out of it, to put in the center of my band-aids. 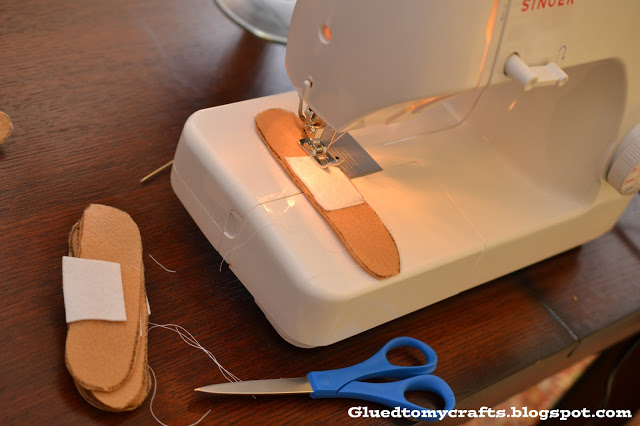 Now comes the fun part – sewing it all together. Using your sewing machine, sew down the white felt to the center of the band-aids. Then continue to stitch along the edge of the tan felt to really give it the look of a band-aid. {My lines were far from perfect but at least I tried!} 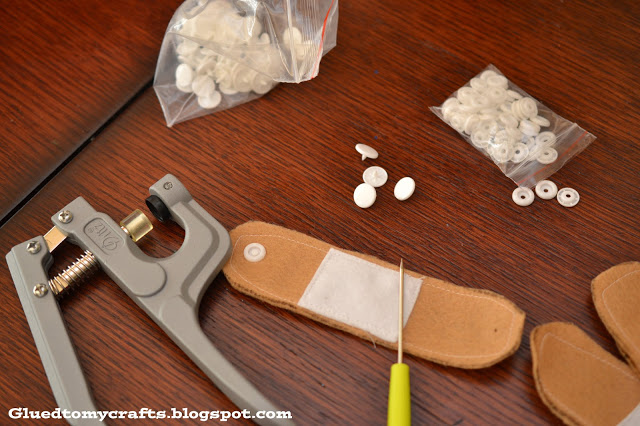 Now if you are using velcro for your band-aids, go ahead & stitch those on with your sewing machine. If not, go ahead & add your snaps accordingly. 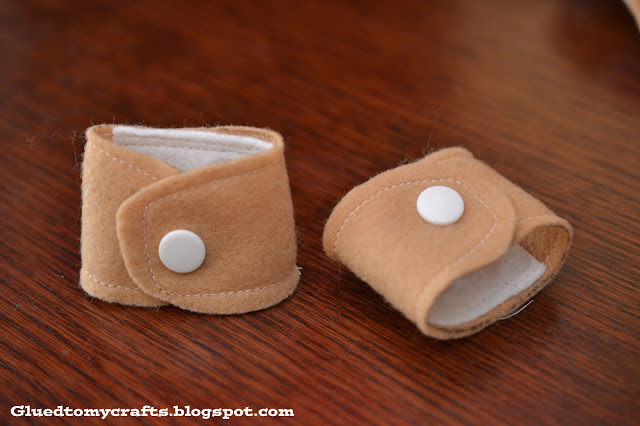 I made one snap face inward & the other outward. This way the band-aid closed nicely.

And that pretty much sums it up on how to make your own Feel Better – Felt Band-aids. 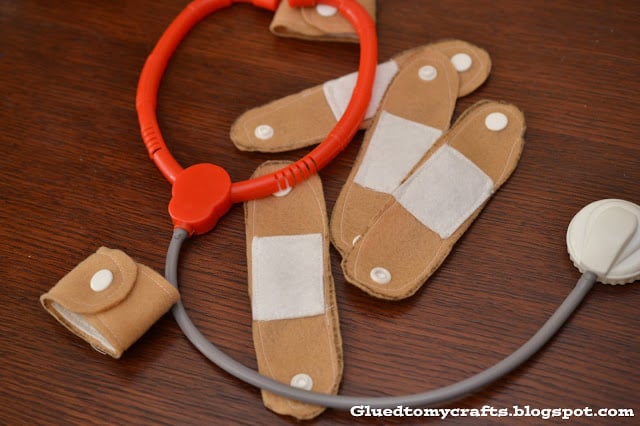 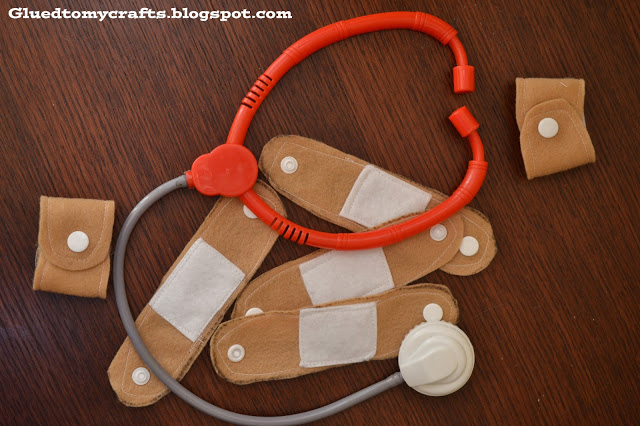 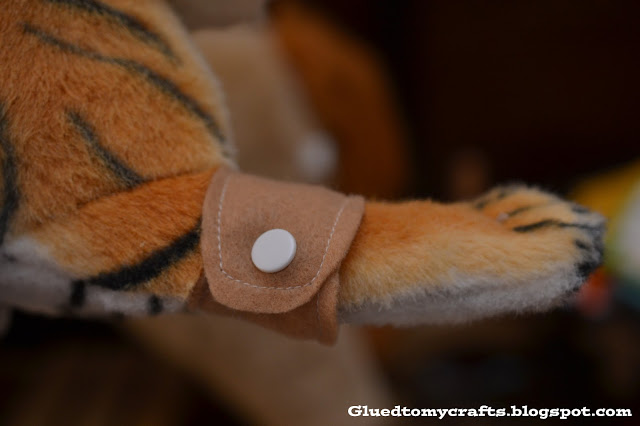 To make them customizable or fun – use different patterned or colored felt, instead of the boring tan color. You can also make various sized band-aids and make a whole first aid kit for your child to play with. Even save old “clean” medicine bottles to add to their kits. You never know, you might mold them into a doctor one day!

Who says I can’t love my sewing machine ;) Anyways… hopefully we inspired you! Be sure to also check out our Get Well Soon – Band-aid Cards {Kid Craft} post and pair it together with today’s DIY for someone who is feeling under the weather currently! #gluedtomycrafts