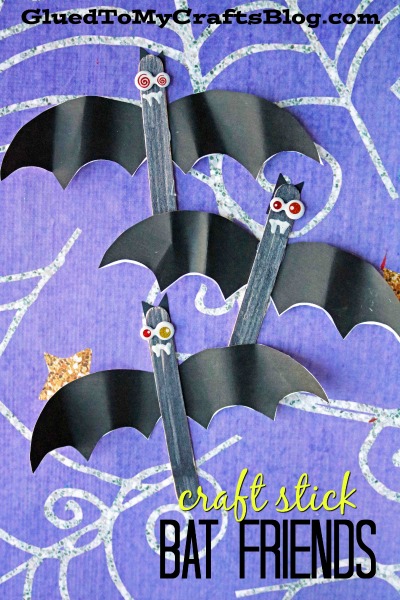 No need to let the kids go batty this weekend! I’ve got a simplest Halloween kid craft idea EVER and you are going to want to check it out!

Keep on scrolling to see how I pulled together these 5-minute Craft Stick Bat Friends with simple craft materials that you probably already have in your home! Not to mention, with the FREE bat wing printable template I’ve included in today’s post, there is really NO REASON not to recreate it! #gluedtomycrafts

* First print out the bat wing template above on white cardstock.
* Using scissors, have children trim out the bat wings from the printable. One printable will makes TWO WINGS FOR ONE CRAFT STICK BAT. Once cut out, set aside.
* Now grab your jumbo popsicle stick {one per bat} Have children color {or paint} it completely black. Set aside.
* Next grab the black cardstock. Cut out one set of bat ears for each bat you are making.
* Ready to assemble? Glue the wing cutouts to the back of the popsicle stick shape, along with the bat ears.
* Finish off by gluing on the wiggle eyes and drawing on “fangs” with the white puffy paint to the front.
* Then play/display your new BATTY FRIENDS! Psst – I “curled/folded” my finished bat wings to give them some dimension, after they were completely dry ;-) Don’t you just love these #cutenotscary bat friends made from popsicle sticks? Be sure to also check out our paper plate version as well!