It’s the most wonderful time of year, so that calls for a new slime recipe right?!

Well look no further because today’s Santa Inspired Slime is sure to get you in the Christmas spirit in no time!!! 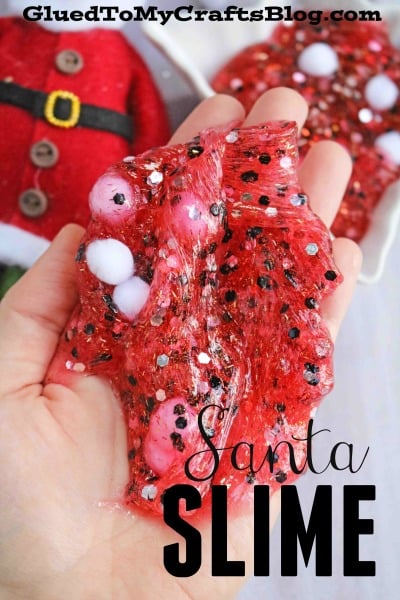 With a mix of red Elmer’s glitter glue, loose black craft glitter and mini white pom poms, you have a recipe for Santa Inspired Slime!

From his red colored suit with white trimmings, to his black boots and buckle, I have you covered on what Santa needs {and wants} this holiday season!!!

Now with all that being said, are you ready to make it happen this holiday season? Just follow our simple and tried-and-true slime recipe that is listed below, to create your own ooey-gooey sticky mixture today! Just in time to lift up your holiday spirits by the weekend!

Happy crafting {and slime making} my friends!!! Don’t forget to share a few pictures before, during and after you make this fun Christmas slime, on our Facebook page! #gluedtomycrafts

PAIR THIS SLIME RECIPE WITH —> The Easiest Elf Slime EVER!

* First grab your mixing bowl and spoon.
* Pour out the entire contents of your 5oz bottle of Elmer’s RED Glitter Glue into the bowl.
* Next add in 1/4 cup of Elmer’s Magical Liquid slime solution, into the bowl and mix it together with the glitter glue.
* Mix everything together, until well incorporated. You will notice the mixture becoming harder to mix and the slime will begin to form.
* Continue mixing until your slime forms and it starts to get hard to mix.
* At this point in time, add MORE glitter if you {cause glitter makes everything better!}
* Take the slime out of the bowl and place it on a clean/washable surface. Begin kneading it with both of your hands.
* If needed, add more of magical slime solution to make the slime less sticky.
* Finish off by adding in a handful of small white pom poms into the slime mixture. Knead them through and get ready for some holiday fun!!!

Adult supervision is required. This project is NOT appropriate for children under the age of three. Warning – if large quantities of contact solution are accidentally ingested (greater than a tablespoon) get medical attention immediately.

Be sure to also check out our Grinch Inspired Slime and Moon Dough posts, for two more “sticky” recipes that are perfect for the holidays! You could even pair it today’s idea for a battle of the best!

Moon Dough Slime Recipe
Come check out this super fun and rather easy MOON DOUGH SLIME recipe! It only takes TWO ingredients you probably already have on hand!
READ MORE