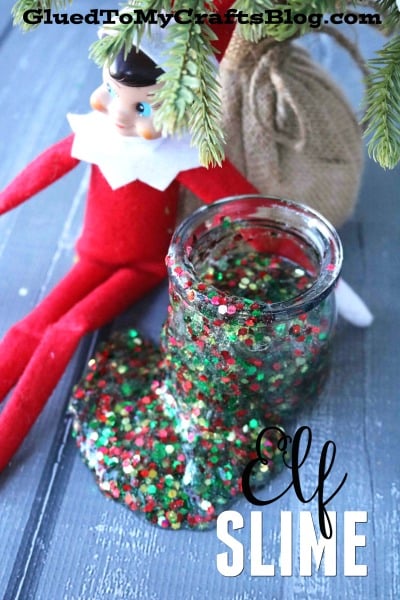 You guys – this is the EASIEST Elf Slime recipe EVER! Perfect for the Christmas season we are in!

We are using the new Elmer’s Slime Activator and it’s a game changer for sure! Keep scrolling to see ALL the details!

Did you happen to catch our Wintery Snowball Fight Slime recipe post that I recently added to the Glued To My Crafts website archives, with the help of a kit from Elmer’s?

Since the Elmer’s Slime Kit had enough ingredients to make TWO SLIME creations at once, I decided to whip up the other mixture real quick and show you how easy it is to make your very own Elf Slime.

I’m telling you, the slime activator in that particular kit is a life changer for those who have been frustrated in the past with their slime making creations. This kit will eliminate the need for excess ingredients or not the right portion sizes. You won’t need to be a scientist to make slime. Just pour the activator mixture into a bowl of glue and mix together to make the sticky creation. Making this the PERFECT DIY for the upcoming Christmas holiday break!!!

For this “holiday themed” elf slime recipe, I simply added a green glitter glue stick from my stash to the leftover clear glue and magic solution supplies from my Elmer’s slime kit. Then I mixed in my Christmas colored glitter and BAM – I had slime that ANY Elf {maybe even Elf on the Shelf} would be super proud of!

Be sure to click over to the original Snowball Slime recipe post to see where I got my awesome Elmer’s Slime-making kit from! It has everything you need and it makes it super easy to craft up an awesome SLIME mixture ANYTIME, ANYWHERE and with ANY added embellishments you like! It’s just a matter of pour, mix and play!!!

Happy “slime making” my friends!!! Don’t forget to share pictures of your sticky creations with us, on our Facebook community wall! #gluedtomycrafts