We are sharing something MAGICAL on Glued To My Crafts today! Roll up your sleeves, wave your magic wands and get ready to recreate this Popsicle Stick Magician’s Hat kid craft idea with us today!

It’s a first-seen-here idea that I hope you fall in love with! Keep scrolling for the detail and free provided printable! 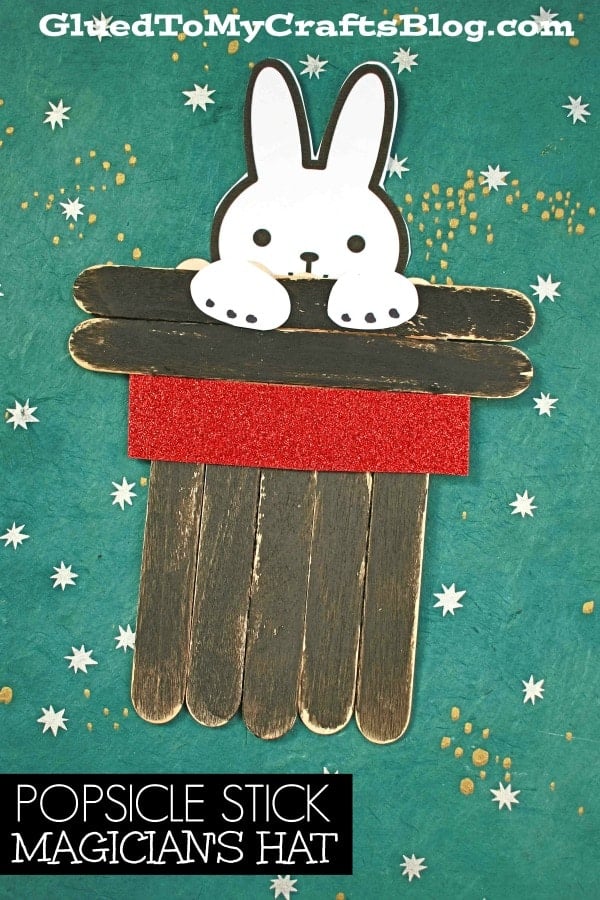 Here’s a super fun fact – two years ago, Lil Man was pulled on stage and got to perform a magic trick during a Michael Carbonaro live show.

That same night, someone also gave us free backstage passes for the meet & greet to meet Michael afterwards. That entire night was pretty MAGICAL and I just hope my son remembers it forever. I know I will!

Anyways – we have been pretty avid watchers of the Carbonaro Effect show on TruTV. for the past few years. Have you heard of it? I don’t know what it is about the TV show but even when the reruns come on, we always sit down together to re-watch them. A good chunk of them we have seen probably 10+ times each. It’s just good stuff, that always starts a conversation of “how” he does it. We would like to think we know… but honestly we don’t. We even asked Lil Man to spill the beans after the live show when he got pulled on stage but he came up with nothing. LOL. 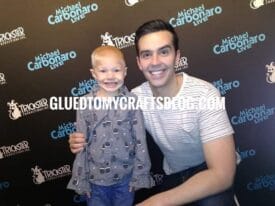 So on that note, because of our past experience and my son’s love of magic tricks, that’s exactly what inspired today’s Popsicle Stick Magician’s Hat kid craft idea. It’s got my favorite craft material in the mix {popsicle sticks} and an adorable paper bunny cutout peeking out from behind, to tie it all together.

It’s absolutely perfect for littles {and bigs} to recreate within minutes, especially since there is a free provided printable {that you will find below} to get you started even faster. All this magic rabbit in hat art project takes is some gluing, painting and a little cutting. No magical elaborate craft skills required! Very basic stuff here!

NO tricky tricks about it – follow the full step-by-step simple tutorial below and recreate your own rabbit in a magician hat craft piece today! Then follow it up with some real magic tricks afterwards, to make it even more fun! I’m sure you are going to have a blast with your child!

Happy crafting, my friends! Don’t forget to share pictures of your beautiful craft stick magician hats on our Facebook page or tag us on Instagram so we can admire your hard work! #gluedtomycrafts 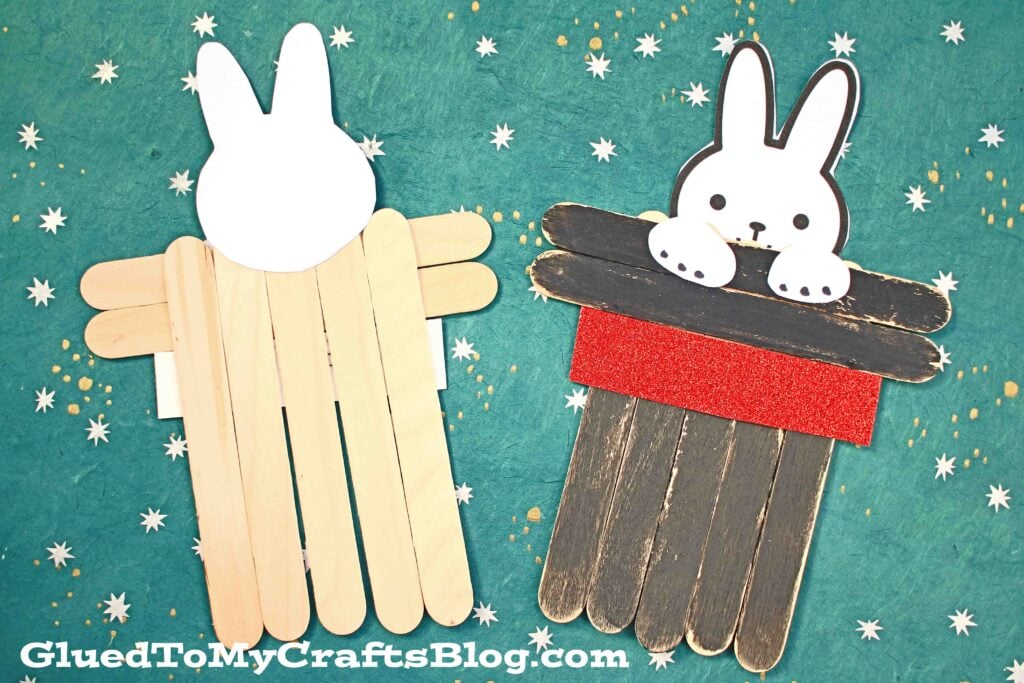 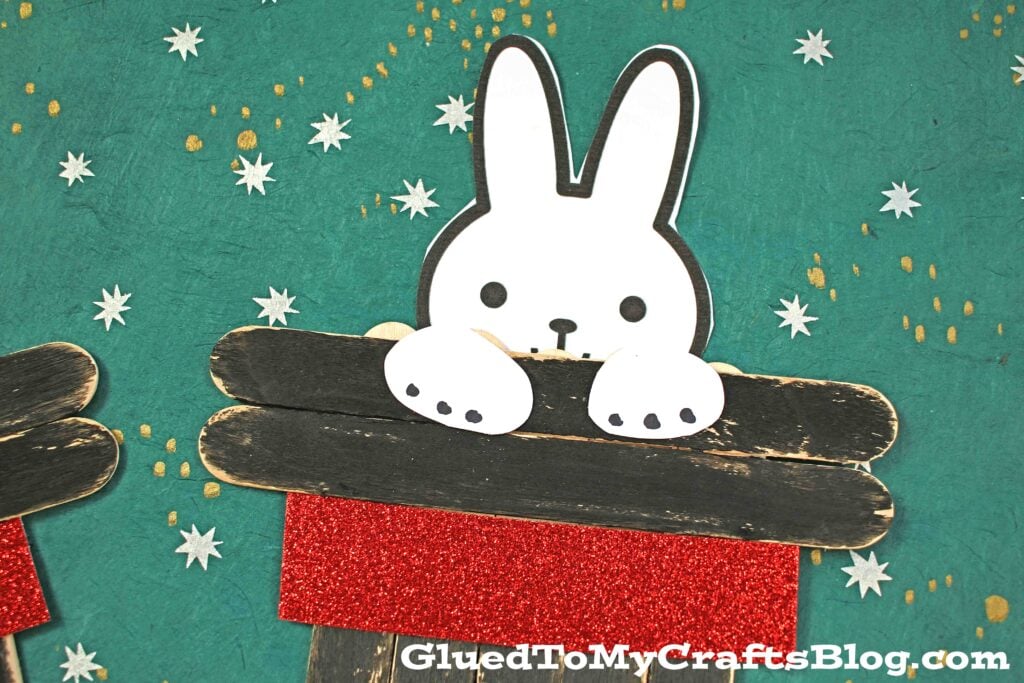 * First assemble the base of your hat by gluing together the popsicle sticks. Lay FIVE jumbo sticks next to each other {side by side} and then glue the TWO remaining jumbo popsicle sticks towards the bottom, going the other direction to make a hat. Refer to our picture for example.
* Repeat for each magician hat craft you want to make.
* Once done, set aside to let it dry completely.
* Next is the paint! Grab your black craft paint, paper plate and paint brush.
* Squirt a small amount of black craft paint on the paper plate.
* Take your brush and paint your popsicle stick shape completely black.
* Again, set aside to let it dry completely.
* Now grab the red glitter cardstock and your scissors.
* Cut a thin, rectangle shape to be placed in the center of the magic hat.
* Set it aside.
* Now take your bunny head printout and cut out ONE head per hat craft.
* If desired – color in the bunny with crayons, however you like.
* Before you set the remaining paper aside, go ahead and also cut out TWO small oval shapes for the paws of the bunny.
* Use the black Sharpie marker to draw on some dimension to the paws.
* Now we are ready to assemble! To finish off the Popsicle Stick Bunny In Magician Hat craft, glue on your cardstock pieces in place. The bunny head will go on the back of the craft {but make sure you place him so it looks like he is peeking slightly out of the hat} while the white paws & red glitter cutout go on the front of the painted popsicle stick shape.
* Go ahead and add any other embellishments you see fit.
* Then let it dry completely before displaying proudly!!!
* Don’t forget to share pictures with us on your social media sites! #gluedtomycrafts

Q: What did the magician say after the rabbit vanished?
A: Hare today, gone tomorrow.

Q: What do you call a joke-telling rabbit?
A: A funny bunny.

Q: What does a cricket player have in common with a magician?
A: They both do hat tricks. 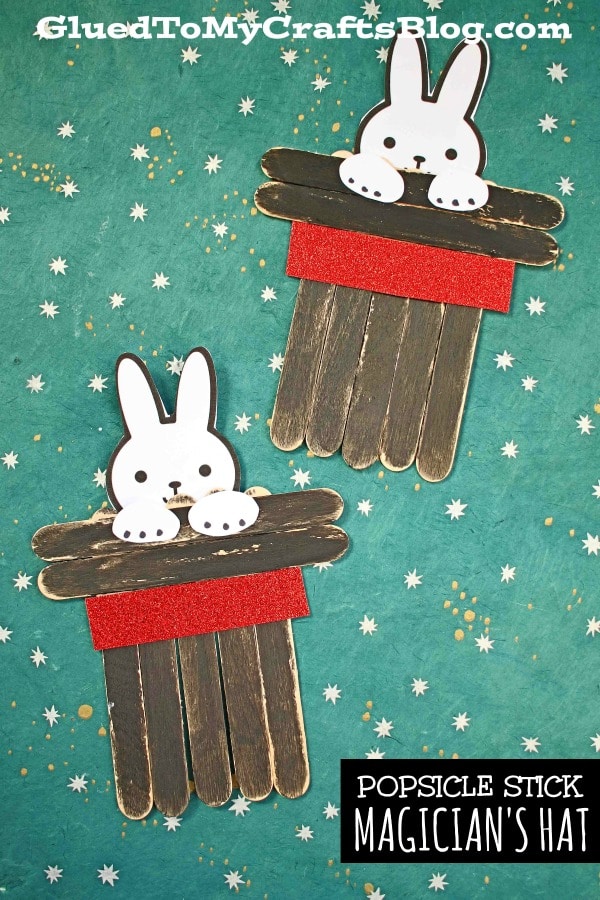 Do you love our unique Popsicle Stick Magician Hat kid craft idea? Be sure to check out our Popsicle Stick Penguins In Sweaters, Popsicle Stick Skunk and Clay Unicorn Magnets craft posts! All of three of these are unique to our website and sure to create some magical craft time in your home today!