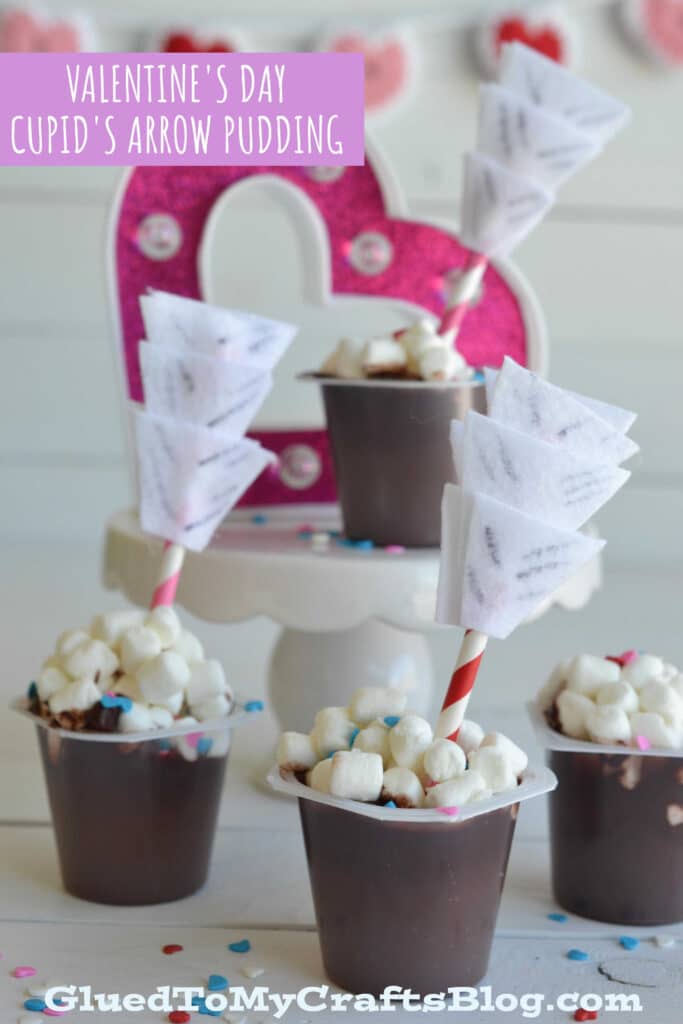 Hi friends! It’s hard to believe but Valentine’s Day will be here before you know it.

So before you start pulling out your hair thinking about creative ideas to bring to a “lovestruck” themed potluck or perhaps celebrate the upcoming festive holiday with your kids – why not check out my latest Valentine themed pudding snack idea?

Today’s Cupid’s Arrow Pudding idea is not only super simple to put together BUT it’s also really inexpensive for a large crowd. Not to mention – it’s super delicious and absolutely adorable too!

With just some chocolate pudding cups, mini marshmallows and some adorable “straw” arrows – you too can pull this Valentine pudding cup idea together in no time!

Whether you make them for your own family as a sweet treat on Valentine’s Day or for a large classroom group activity, I hope this creative semi-homemade pudding snack idea inspires you!

Happy crafting, my friends!!! Don’t forget to share pictures of your cupid valentine pudding cups before they get devoured, on our Facebook page or tag us in Instagram to see them! I can’t wait to see how awesome {and sweet!} your cupid’s arrow pudding cups turn out! #gluedtomycrafts

* First you will want to assemble the paper straw arrows. This is done by cutting a paper straw in half {one per pudding cup} and attaching some felt cutouts that look like feathers {I glued 6 triangles per straw on and drew lines on the felt with a Sharpie, to give the appearance of a feather texture}
* Once you are ready to assemble your treats, open all the pudding cups you will be making/serving. Set those aside.
* Place a good amount of mini marshmallows on top/inside the pudding cups, along with some sprinkles.
* To finish the Cupid’s Arrow Valentine Pudding Cups, place the “arrows” in the pudding cup, facing upwards.
* Serve immediately or store in fridge until serving time. If you enjoy this Valentine’s Day inspired cupid pudding idea, be sure to also check out the Beach Themed Version on the Glued To My Crafts blog.

It’s another quick and simple pudding cup idea that can be whipped up in a flash for your classroom party but for an end-of-the-year celebration instead!!! Enjoy! #gluedtomycrafts